Erica Falk is a writer. Her parents just died and left their family house in Fjällbacka to her and her sister. Discontent with her current life, she decides to move there to make a new start. At the same time, one of her childhood friends is found dead in town, murdered. Erica wants to write a tribute to her friend, but when she starts looking for clues about her friend’s life she also starts to unveil the reasons why her friend was murder…

This is how the first book of Camilla Läckberg’s crime series begins. The 11th book of the series will be published soon, with all crimes set in Fjällbacka, where Camilla Läckerg grew up. Before 2003, when “The Ice Princess” was first published, Fjällbacka was known as the place where Ingrid Bergman spent summers with her husband. There is a bronze bust of her in Ingrid Bergman Square and her ashes were spread near her beloved Dannholmen island.

is an old fishing village from the 17th century, which has turned into a very famous summer resort. It does not have a train station, so you can only get there by bus, if you consider public transportation. The best way to travel may be by car, which gives you the opportunity to stop on the way and take in the scenery. And beautiful scenery it is!

Since you are going there…

If you are a fan on spending a week or two in one place, Fjällbacka can be the perfect destination, especially during the summer, with plenty of activities to enjoy. However, you can also explore its surroundings and design a little tour around it. Or make this village part of a bigger road trip…

Oslo, Norway, is about 180 km away from this village. Although Norway is not a member of the European Union (Sweden is), it is a Schengen country (Sweden also is). This means, people can move freely between Norway and Sweden. Therefore, you can land at Oslo Airport and start you journey by visiting the city (check ACPN album on her trip in 2019).

Next, you can rent a car and take the road along the coast, which is full of islands in all shapes and sizes

, heading South towards Fjällbacka. You can take a quick stop at the Rock Carvings in Tanum

, a UNESCO World Heritage Site from the Bronze Age.

After your stay in Fjällbacka, you can continue you trip towards the South, always along the coast, until you reach Gothenburg

, the biggest city in Sweden, right after Stockholm. From there, you can turn East, towards Stockholm, and visit some cities like Borås

, a very cultural and avant-garde city, and Norrköping

, by itself, deserves an exclusive holiday visit, of course. Nevertheless, this vibrant and cosmopolitan city, yet full of history, is a perfect ending for your adventure through Sweden. 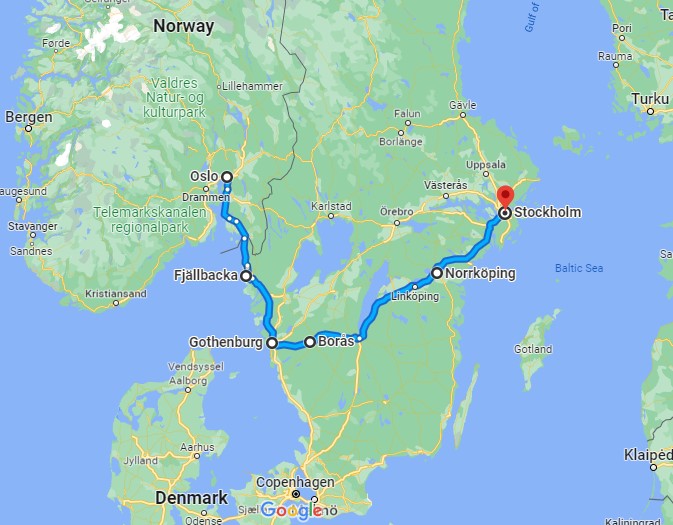 Alternative 1: You can reach Gothenburg and catch the plane there, as this city has an international airport.

Alternative 2: You can drive further South after leaving Gothenburg, following the coast until Malmö

, the third biggest city in Sweden. It perfectly combines modern and unbelievable old buildings, back to the time Malmö was a Danish city. As it also has an international airport, this could be the end of your journey through the West coast of Sweden.

Alternative 3: Since you are there and you are driving a car, you can push your trip a little further and cross the famous Øresund Bridge

, which connects Sweden to Denmark, and end your trip in Copenhagen, Denmark

. However, you can also take the train between Malmö and Copenhagen. Denmark is both a member of the European Union and a Schengen country. 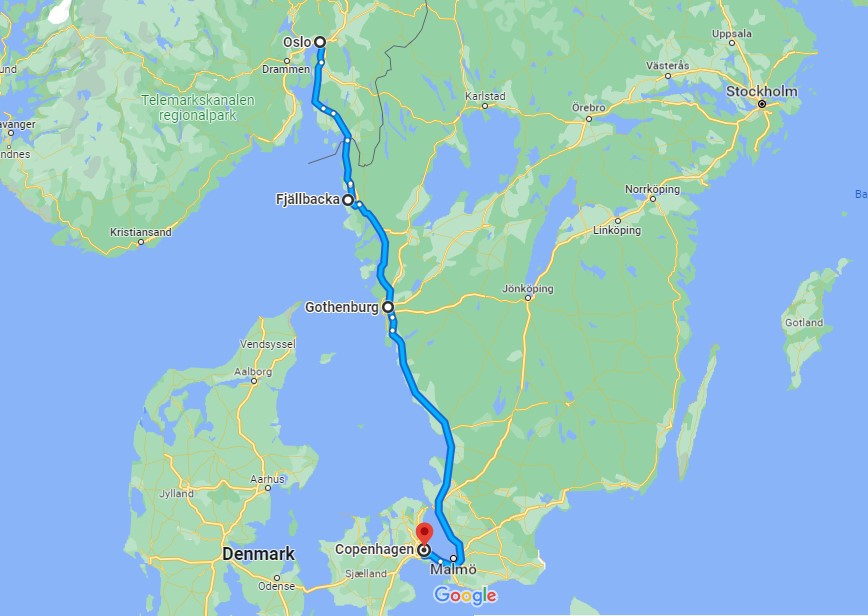